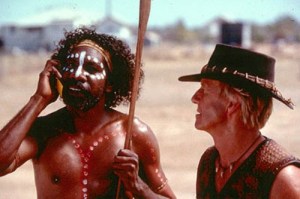 (Read with your best Australian accent)

Dundee:  Crikey, mate, don’t believe that. Stick with God’s word and have a g’day!

Posted by Truthinator on August 9, 2011 in Uncategorized

Do you guys remember the song by REM called “It’s the end of the world as we know it”? I have written a little ditty that has a similar tune…

nobody takes a stand

Doug Pagitt,  what a shame

Everyone’s afterlife turns out the same?

Rick Warren, on the mound

what happened to dinners on the ground?

curve balls, to the flock

Posted by Truthinator on March 25, 2011 in Uncategorized

Imagine there’s no Heaven (or Hell), it’s easy if you try… Rob Bell’s new Book Love Wins has been called “a fine book” by some on the extreme religious left and it has been called heretical and Universalist by more conservative Christian commentators but one thing is sure… the book is at the center of controversy.

While Bell denies being a Universalist, it is difficult for him to prove it based upon his belief that everything works out for everyone in the end. His proponents call his work “generous”and his dissenters call it historically inaccurate, Theologically unsound, devastating to souls, and indefensible.

The Truthinator has been warning about the Emergent toxic sludge for about 10 years now. Rob Bell pastors a 10,000 member church in Grand Rapids, MI but that is not the real danger. The real danger lies in the fact that young people and aspiring pastors have enshrined this guy as the true north position on the compass of truth! You may say to yourself that your church is fine and that nothing new ever happens in Turkey Neck, NC but chances are the next pastor called to the churches in all of the Turkey Neck, NCs in the world will have been greatly influenced by Rob Bell and others like him.

Be afraid for your children and grandchildren. I have seen the face of America’s religious future and it is scary…

Posted by Truthinator on March 24, 2011 in Uncategorized