Announcing Rick Warren’s own line of premium sunglasses. Eye-segesis brand sunglasses will cut through the glare you automatically drift into every time one of those Bible thumping preachers starts finding Jesus in every passage. Because everyone knows, the Bible is all about you! Don’t be taken as irrelevant by wearing those traditional shades… every Seekermergent needs a pair of Rick Warren’s Eye-segesis brand sunglasses. When you wear these babies, the Bible appears to say whatever is comfortable to YOU. Get yours today from any Seekermergent multi-campus megachurch lobby, new age bookstore, or Zondervan coffee house. Order by phone by calling 800-PIPER-SAYS-I’M-OK. Don’t get caught in your Hawaiian shirt, shorts, and flip flops next Sunday on the platform of your multi-campus megachurch preaching about uniting all faiths under one homogeneous umbrella without a pair of Relevant Rick’s own Eye-segesis brand sunglasses.  UBU!

Posted by Truthinator on June 15, 2012 in Uncategorized

Has John Piper Lost His Mind?

What? Uh, what? Is John Piper crazy or is he bowing to the idol of inclusivism? Allah is a demon and the Jews try to get to God without His son, Jesus. The Bible teaches there is one God and one way to get to Him. Like it or lump it, that is the way it is… it sounds like Rick Warren’s influence is having an effect.

Posted by Truthinator on January 19, 2012 in Uncategorized

Take it to the Next Level (Humor)

When I was a child, I spoke as a child, thought as a child, and reasoned as a child but once becoming an adult I got an iphone & twitter account and elevated childishness to a whole new level…

Posted by Truthinator on August 30, 2011 in Uncategorized 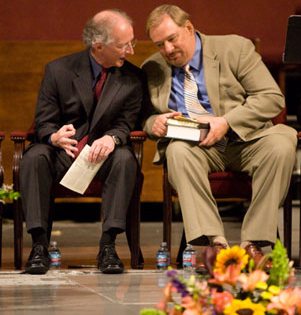 Piper:   I just tweeted, “Farewell, Rob Bell”. If you don’t distance yourself from those new-age Bhagwans you consulted for your diet plan, you’re next…

Posted by Truthinator on July 19, 2011 in Uncategorized

Actually, heresy is “opinion or doctrine at variance with the orthodox or accepted doctrine, esp. of a church or religious system” according to dictionary.com . This is classic Rick Warren…change what you don’t like into what you would prefer to be true and call it truth.

Other Warren classics include, “sin is what causes you to be unfulfilled” and “sometimes a song or a touching story can move a heart when the Gospel cannot”.

Heresy is the repackaging of God’s redemptive story into a pragmatic, post-modern, money-making, ego-inflating, myopic, utopian soliloquy and ensconcing it in the mega, 3-ring, multiplex, entertain-o-rama church! Taking out the message of God’s word and replacing it with bits and pieces of self-help, eastern religion, new age, roman catholicism, mysticism, universalism, and classic liberal protestantism all spun into non-offensive, post-modern, ADHD gobblygook… this is heresy.

Just because you tweet it, that don’t make it so. John Piper may think Warren is “doctrinal and sound” but if you spend some time reading his books, listening to his sermonettes, and reading up on his friends and influencers in the “faith”, you will come away with a different opinion.

The truth man gets a little cranky sometimes when he sees this “spin the bottle and call what falls out truth” stuff coming from the left coast.

To correct Warren, truth is truth. It cannot be otherwise or it would not be truth. I would tend to think that the improper handling of truth would be the fault of the practitioners which is probably the point he was trying clumsily to make. However, truth is not called into question simply because someone may not correctly deploy it. Truth also does not depend upon its reception. Everyone in the world could unite against God’s word and that would not render a single jot or tittle null or void! The book of John equates Jesus Christ with God’s word when it says, “In the beginning was the Word and the Word was with God and the Word was God. He was in the beginning with God. All things came into being through Him, and apart from Him nothing came into being that has come into being. ” Handle God’s word well and with great effort and struggle; however, the mishandling of God’s word still has no power to leave it anything less than completely and totally true!

Be careful of this guy and his cohorts in the Seeker and Emergent movements. This is a dangerous crowd.

Posted by Truthinator on January 5, 2011 in Uncategorized