We pray you will contemplate using Tel-Lectio Divina Communications the next time you want a new revelation from God. Just meditate on the possibilities! The next time someone tries to fence you in with truth from the Bible, just dial direct for a new & different interpretation that will match your own flesh’s desires. Tel-Lectio Divina Communications is a favorite of Roman Catholic mystics, evangelical protholics, and Emergents alike. Afterall, all roads lead to God…whomever he or she might be! Tel-Lectio Divina is recommended by Popes John Paul II, Benedick, Warren, McLaren, and the list goes on.

Sold in RC monasteries & Emergent Church coffee houses throughout the world. You will also find us located beside the Beltone hearing aid desk in the lobby of most American churches. Dial 666 to get an outside line and proudly proclaim “Dei Verbum” to all of your post-modern friends…

Posted by Truthinator on January 13, 2012 in Uncategorized

Posted by Truthinator on January 10, 2012 in Uncategorized

Rome if you want to… (Opinion)

Has anyone else noticed how much popular protestantism has turned toward Rome? Everywhere you turn you see examples of ecumenism, inclusiveness, tolerance, and even promotion of the Roman Catholic faith.

I know I am preaching to the choir so to speak but, in case you are not convinced, look around for examples of popular preachers, authors, and speakers who deem Roman Catholicism as just another denomination of Christianity. Look at how many of the same quote Roman Catholic mystics in their books and sermons. Look at how popular the “new (and incorrect) perspective on Paul” is and how people can’t help but follow after anything that seems “relevant” and/or “tolerant” of falsehood.

Next there is the practice of denominational and nondenominational churches pronouncing who is and is not saved based upon their own personal preferences.  Some evangelicals pronounce everyone saved despite the fact that many are adherents of other faiths. Since when do we have the authority to pronounce anyone as being in or out of the faith? We can observe and be wary but only God knows even though the Bible does give clues. Believers persevere, love God, are being sanctified over time, and produce fruit for example.

Yet another clue of America’s fascination with Rome lies in the way people accept and promote books written by men in place of the Bible. One mutli-gazillion selling preacher/author bragged about the fact that people would read his book that would not read the Bible. In my opinion, that doesn’t say much for your book! To claim that a man’s writings are “as good as the Bible” in its communication of the message of scripture is very similar to the catholic church claiming the edicts of the pope are the same as being from God…

Much more could be written but the point has hopefully been made. America is much too close to Rome.

Posted by Truthinator on January 1, 2012 in Uncategorized

Pastor to assistant:  Hold brother William under a little while; he is a salesman and I want this to take…

Image used with permission from my friend Eddie at Calvinistic Cartoons

Posted by Truthinator on September 3, 2011 in Uncategorized 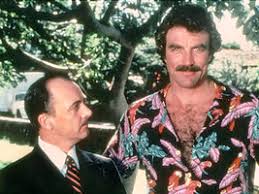 Higgins:  Magnum, I have decided to work in sync with God to bring about my justification.

Magnum:  Higgins, you must drop those Anglican roots of yours and receive God’s sovereign grace. Are you familiar with the Solas?

Higgins: Yes, the Solas are members of my polo club…

Posted by Truthinator on July 26, 2011 in Uncategorized