Is It Easter Already (Satire)

Posted by Truthinator on March 31, 2014 in Uncategorized 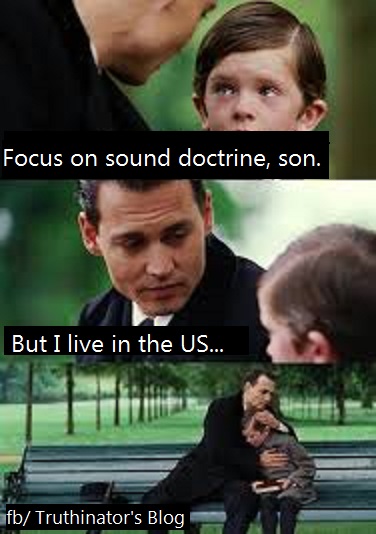 Posted by Truthinator on March 23, 2014 in Uncategorized

Sing Along with Truthinator’s Blog

Posted by Truthinator on March 23, 2014 in Uncategorized

I have done a series of anonymous interviews over the past couple of years where people explain their experience as their church went through a shift to a pragmatic Seeker Sensitive and/or Emergent paradigm. This interview was with a Truthinator’s Blog reader from Canada. Questions from me will have the heading “ T” and the interviewee’s responses will be labeled “G” for guest.

T: First of all, thank you for being willing to discuss your experience at your previous church. Please explain what happened and give as much detail as you feel comfortable.

G: We had been attending the church for 12 years. We attended with our daughter, son in law, grandchildren and son. My daughter and I were devoted Sunday school teachers for 5 years and we were honored to serve The Lord in that capacity. My husband and son ushered and our son in law started the evangelism ministry, Fishers of Men (Ray Comfort/Living Waters). After 10 years of just plodding along, our eyes were opened when Life Action Ministries entered the church. This is a revival ministry (?) that goes into churches with a formula for revival. It was created after the founder had a vision and could not write fast enough what God was telling him….,now that was a huge eye opener, but the church accepted it with open arms. They are based on Keswick Theology and Finneyism.

We did not attend the meetings. What set off more alarms were the videos by Francis Chan and other pragmatic preachers. We knew right away that this was all bad…false teaching. We studied scripture and noticed discernment sites warning of things that were entering our church. Newly placed books that we were seeing in the library were by authors that we recognized as false teachers. My daughter did book reviews on some and took them with the books to the elder board in hopes that the books would be removed. That did not always happen.

I had a woman who had been a helper of mine in the church nursery meet with me over a disagreement and she informed me that God spoke to her audibly. Apparently, many people in the church were hearing God speak to them in that way. This was so alarming to us because this had not been the teaching of the church during the past 10 years.

Then came the True Woman’s conference to which our church sent a bus load of women. We contacted the elders with warnings of Priscilla Shirer and the mysticism that she encouraged and instructed. You have to know that we did a lot of research and this was very upsetting that our church would allow such a thing for its flock.

To appease our warnings, the pastor had at the shareholders meeting, a huge warning talk on how bad mysticism is and how to be discerning, etc., but they still sent the women. They came back with chalk for their chalk circles and a new desire to hear God speak to them. I posted warnings on a regular basis to all my Facebook friends about these people (teachers, authors, and speakers promoting mysticism) and the danger of mysticism….a lot of warnings.

Next, my husband sent a video of Justin Peters to the elders and suggested they consider showing his discernment videos to the church during Sunday School time. This was not welcomed at all and we were told that we weren’t even members so our ideas were not important. We spoke to the head elder who runs the church. People are literally afraid of this man and have named him the Gestapo because of his dictatorial attitude. We had quite a conversation with him and he informed us that the church did not need discernment but did need to have a speaker come to teach them how to pray.

They had Gehard du Tuit come, even when we had told the elder that we had watched the videos on line and he was not lining up with scripture. It was after more investigation that we discovered he was Keswick and associated with Life Action. I made clear to the elder that we were not in agreement with Life Action or True Woman because of their mystical nature and Keswick theology associations.

Two weeks later, we were sitting at the back pew. My daughter was home with two sick boys and her husband was working so it was just my husband, our son, granddaughter, and myself. We were waiting for my husband to collect the registers when the head elder made a bee line to our pew along with another elder and the assistant Pastor. People were streaming out of church slowly and many were just standing around in that area talking. My husband was ordered over to sit down and the elders surrounded the pew. The head elder abruptly informed us that we were not welcomed to worship with them anymore and we were not welcomed at this church. They would be holding a meeting to discuss our situation and if we wanted we could attend. They were furious with the rebuking posts I had placed on my fb page towards the allowance of mysticism being brought into the church. I was also questioned about why I would put John MacArthur’s 7 year tribulation on my site after the head pastor had just taught a 3 1/2 year tribulation.

We were also asked all about our friendship with another couple in the church who were away in Texas for the winter. These friends had posted on my page and the elders were furious because of the posts. I asked the elders how they would even know what was on my page since none of them were even my fb friend. I was told it was public. Clearly they had been viewing my posts. My reply to them was that it was my page and none of their business. To be clear, I asked three times, “So this church has no problem with mysticism, breath prayers, or contemplative prayer?”, and each time I was told the church had no problem at all with any of that. We later found that the church congregation was told that we left of our own accord and the head elder denied every saying that the church accepted mysticism.

T: Ok, what about the pastor? What was his involvement in all of this?

G: We had several conversations about our concerns with the Pastor but he stayed completely out of it except to warn us about our involvement in discernment (referring to my Facebook page posts dealing with discernment). When we left the church, he was waiting in the hall where the elders were grouped together and watched us leave. We did not hear anything from the church ever again.

T: So it was mainly your Facebook posts the church was concerned about?

G: The only reason for our dismissal was my fb postings. We were told I was divisive and paranoid and if we weren’t careful, we would be in a home church. Also, we were going down into the deep, dark hole of discernment. Every time we talked with the pastor, he would give us a warning.

T: Ok, so it sounds like the pastor was not being completely honest with you. It sounds like he was in favor of the changes but would not be vocal to you the way the elders did. Is that true to your knowledge? The elders were in charge of this transition?

G: Yes, I believe that to be true. The head elder was in total control and did not want anyone speaking out in any fashion.

T: Ok. Do you think the majority of the church attenders had any clue about such things as mysticism and why that is a bad thing? Also, what was the primary motive for these changes? Growth? New look/feel for the church?

G: No one we ever spoke to had any knowledge of mysticism, let alone that it was wrong. Of all the warnings and postings I placed on my page, not one person from the church ever responded, or came to me to question it. The the head elder had said there had been complaints to them about what I was posting…Stand Up For The Truth, Apprising Ministries, Lighthouse Blog, John MacArthur, etc….these were the kind of sources that I used. All reputable. I was just so concerned for the road our church was going down. We just could not believe it! It was so disheartening…no one would listen…we were the divisive ones. Unbelievable.

T: So it sounds like a steamroll job. They (the elders) knew what they were going to do at the church and if anyone objected, they would steamroll them. This is unfortunately typical of this type of change.

G: Yes. We were steamrolled. Another couple who read and commented on my Facebook page was also dismissed from the church in similar fashion.

T: Sad. I read the emails you sent to me where you communicated with the elders. The letters seem accusatory toward you and your family. They clearly view you as troublemakers. Did they ever seek to explain why their moving the church into mysticism was a good thing (in their minds)?

G: No. They just insisted I stop posting discernment material on Facebook.

T: They had a line in the sand.

G: Yes. That is ok, however. We are better off being out of that place.

T: Wow, this is very sad information but unfortunately not unusual these days. Due to length, we will conclude here. I really appreciate you being willing to discuss this with my readers. God bless.

Posted by Truthinator on March 22, 2014 in Uncategorized 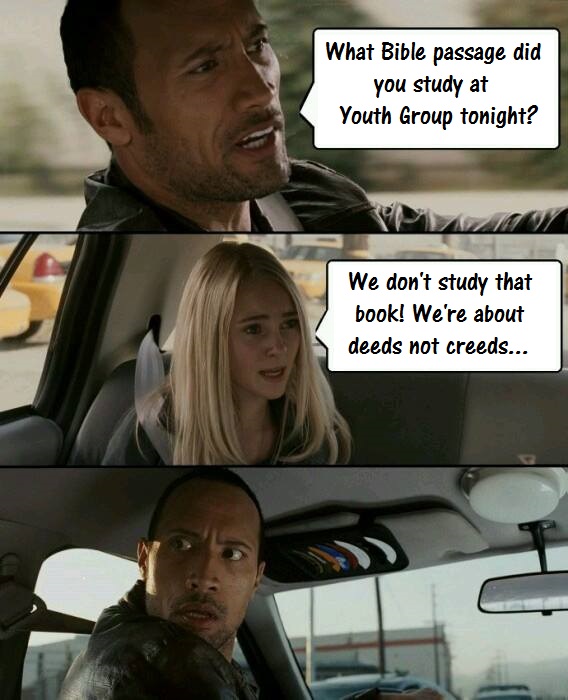 Posted by Truthinator on March 14, 2014 in Uncategorized

Posted by Truthinator on March 11, 2014 in Uncategorized

The Look I Have When I Pity The Fool

Posted by Truthinator on March 9, 2014 in Uncategorized

A Word From Our Sponsors (Satire)